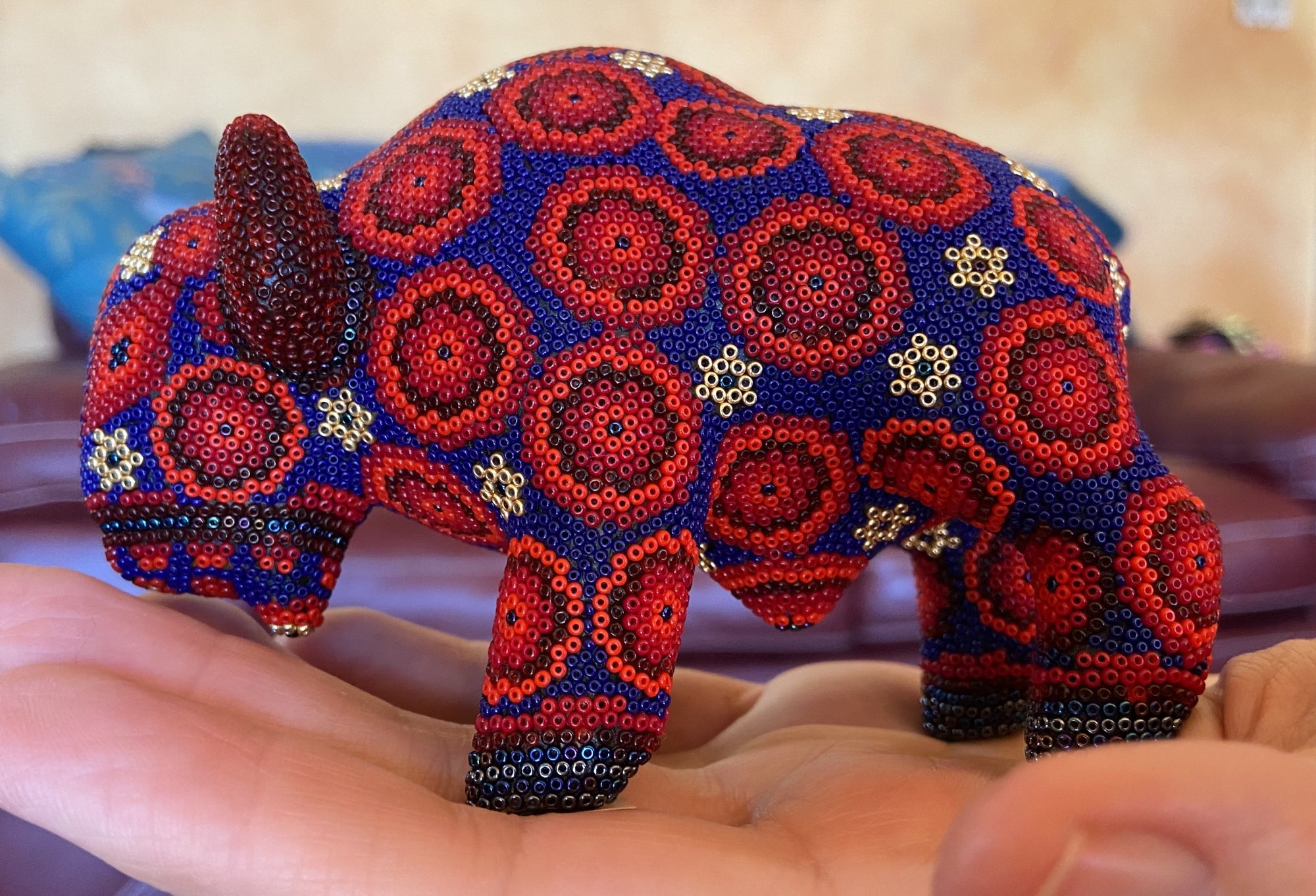 Along the borders of the states of Jalisco and Nayarit, Mexico, in the mountains of the Sierra Madre Occidental, live an indigenous tribe of unique and magical people: the Huichols. Because of the extreme remoteness of the territory, the Huichols were not conquered by Spanish invaders nor greatly changed by Mexican culture. Therefore, they live today very much as they did centuries ago and are considered by many anthropologists to be an invaluable “window” into the ancient past of the Americas. Often the Huichol are referred to as “magical”, in part because of the mystical quality of their healing powers. The Huichol today number about 10,000.

A deeply religious people whose beliefs encompass every aspect of life, they worship multiple deities, most of which represent life forces: earth, water, fire, wind, sun and moon, among others. Religion and the arts are inextricably intertwined in Huichol life; therefore, often their deities and ceremonies are incorporated into their art. The growing familiarity with Huichol art and culture has been beneficial. It has created a demand among collectors for the art, providing the Huichols more work at home, thereby helping to maintain strong family and community ties.

The most recognized forms of artwork coming from the Huichol people are yarn paintings and beaded objects. In both cases, a wooden form is covered with a mixture of beeswax and pine pitch. With yarn paintings, the wax covers a flat “canvas” and strands of colorful yarns are laid into the wax forming intricate “paintings” and designs. The beadwork is similar: a figure is carved out of wood and covered in the wax mixture. Then individual seed beads are set into the wax until colorful patterns and imagery emerge.

Through their art, the Huichols share with us segments of their tradition and mythology. Some of the deities most often portrayed are the Deer (god of fertility and brother to the Peyote); the Peyote (god of knowledge and the center of their religion); the Eagle (god of life); the Snake (used in prayers for rain); flower motifs (appearing in many forms, often depicting the sacred Peyote or corn flower); and Scorpions (considered to be small messengers from the gods). If stung by a scorpion, it is believed that the gods are saying there is something the victim has been neglecting. If allowed to survive the sting, servitude in the holy house must be done to make amends.

The Huichol beliefs are complex and elaborate, involving myth, shamanism, ritual, peyote, prayer and ceremony. Much of their current art depicts these religious themes and retells mystical stories. Therefore, each piece of Huichol art, in addition to being a beautiful work of art, carries its own historical and spiritual significance.